Forbes.com declares USA Today the biggest news source in the Southeast US! Sort of...ok, well...maybe not...

Summary: According to Forbes.com, the most linked-to [and taken as most used] news source for much of the Southeast is USA Today. Fascinating.

Forbes.com declares USA Today the biggest news source in the Southeast US! Sort of...ok, well...maybe not...

The last time I remember hearing anything much about USA Today was probably in the mid-90s, when a big-damn-deal was made over the fact that it was in color. I quite literally know nothing else about the newspaper except that a hotel I was once staying in for a college trip gave them out as freebies and I thumbed through it but did not feel impressed. However, I cannot say whether I was not impressed because of the level of news-coverage or I was not impressed because the astounding array of colors on display were less than what they were hyped to be. Do not take this as a critique or jab at USA Today, except in that I do consider myself a News Junky and I do have friends who often link to news and it surfaces essentially never in my own circles. As with most anecdotal evidence, this means nothing.

When I saw this link to a Forbes.com interactive infographic about how news is read/shared by different regions, I was surprised to see USA Today marked as the number one for the Southeast. Of course, this isn't necessarily the best map in the world, because it says that The Onion tops two states, that Tennessee considers The Huffington Post to be the most used news source, and has Fox News at a much smaller slice than I would have guessed. I buy that the NYTimes probably dominates New England and Fox News probably dominates Texas, but I'm not even sure if I buy that the LA Times dominates all of California. 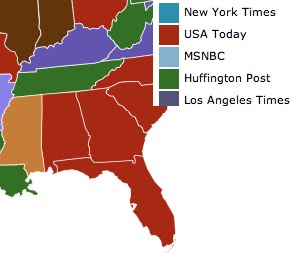 Reading closer, the criteria is listed as "which news sources are read and shared at above-average levels by state," and then it lists Bitly as the partner. So, basically, a state gets a news source attributed to it if it submits and clicks more bit.ly links than average? The wording suggests that there should be multiple sources for each state (all the sources that are used above average by the state), but in the "more information" section they seem to explain it as that's the news source that is most above national average. In other words, maybe the Southeast isn't particularly enamored with USA Today, it just doesn't detest it as much as other places? And this could have been an interesting graphic.

Would be interesting to see how all the other link shorteners work out when added in and then the outlier status was tamed for more straight clicks per populace or something. Still, Bitly's data makes for one interesting thing, since Twitter now has its own built in link shortener (t.co) this seems to say that people who use Twitter, etc, through app clients and so need some other built in shortener use the news in this way. I'm sure there is some marketing buzz you can build out of that.

[Note, as is common for me, the infographic was first spotted on Flowing Data.

OTHER BLOTS THIS MONTH: March 2012