As Huntsville and the Tennessee Valley continues to lose its collective mind: Man shoots motorcyclist because he felt like shooting someone

Summary: The crime rate around here seems to be on the up, at least reported as such, but it's not much the quantity as the quality nowadays.

As Huntsville and the Tennessee Valley continues to lose its collective mind: Man shoots motorcyclist because he felt like shooting someone

Just about any time you head over to Breaking News from The Huntsville Times (via al.com) you find a screen much like this: 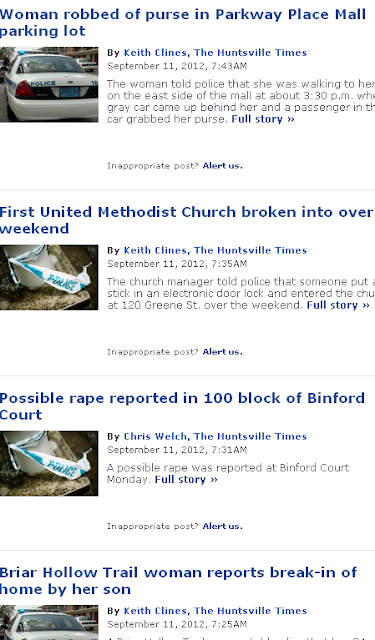 Of the 8 posts made so far this morning (as of 10am CST), 5 are about crimes, 1 is about the weather, and 1 is about the daily Obits. Meaning only one non-crime non-regular post has surfaced. And while the news media has long been criticsized for over-stressing crime while de-emphasizing more positive spin stories, at least around here it seems its not so much the quantity of the crimes—though that does seem to be up—as the quality of them. By which I mean they seem more random, more crazy, and more...I don't know. Like this one: "Man who shot motorcyclist on U.S. 72 in Athens 'just wanted to shoot someone'":

The motorcyclist, Brandon Matlock, called police about 2 p.m. and told them he was riding westbound on U.S. 72 East when someone in a green SUV also traveling west pointed a pistol at him and then took several shots at him, hitting him in the back and the arm, police said...

"McGlawn [the shooter] told us he was mad at his father and just wanted to shoot someone...He said he had been driving around all day and when the motorcycle passed him he pulled his 22 caliber pistol out and shot the man," [Athens Police Chief Floyd] Johnson said.

Then Johnson says that McGlawn turned himself in because "he drove around for a while and got to thinking about what he had done..." Holy crap. Man gets pissed at his dad, drives around for a bit in a huff, probably blaring angry music, sees a motorcyclist, and opens fire. Then drives around more and goes, "Should I not have done that?" What happened to the good old days where angry teens went out into the woods and shot up a sign, or called up their girlfriends and turned anger-against-dad into a rant that gets them laid? Hell.

OTHER BLOTS THIS MONTH: September 2012