Finally have my own custom Minecraft skin (hint: it's me), and still my favorite Penny Arcade comic after a bit...

Summary: Decided it was time for me to get into Minecraft...as a skin. Also, Penny Arcade.

Finally have my own custom Minecraft skin (hint: it's me), and still my favorite Penny Arcade comic after a bit...

Despite playing Minecraft for a time, I have almost always just used the default skin or a sepia-toned variation of the default skin I made. When my wife started playing, and playing became a multiplayer thing, the Fourth Doctor came out and has been my main skin for a bit, but I've been dissatisfied in that my wife's skin is a blonde scientist that looks like her (when she had longer hair) while mine looks more like Chris Hardwick (of the Nerdist) dressed up as the Fourth Doctor. I've thought about tweaking it, but then decided that if I am going to tweak a skin, I should go all out. The result? I made myself into a Minecraft skin:

I'm thinking of making an alt that is me wearing a tweed jacket with a bow tie for my more "collegiate" look (though I usually just wear the Hawaiian shirt to the library). Still, not bad, huh? High forehead and graying hair and all.

The tool I used was Novaskin's Minecraft Skin editor and I recommend it. It was fairly easy once I got used to the buttons, and allows you to upload pre-made skins if you need to edit (a couple of others I saw always started from scratch). Now that I've done a couple via a graphical editor, I'm sure I could do it with just GIMP or some such, but prior to this I had no idea which body parts were exactly which (or what the "hat" was).

Unrelated, but found via the recent memory-lane backtrack Penny Arcade's Gabe did on comics related to World of Warcraft, is this Penny Arcade comic where Tycho gets really angry over Gabe implying Warhammer is a Warcraft knock-off. I'm only mildly interested in either of the brands, but, "I will open one of my six mouths, and sing the song that ends the Earth," is still probably my most favoritest line from any webcomic in history, and so I felt it would be fun to share the whole thing (click on it to see it on their site and full sized): 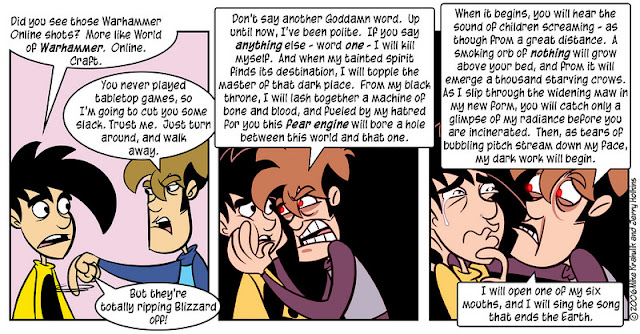 Well, I'm off to contemplate why I suck so much at The Binding of Isaac, and to feel slightly more justified in my dislike of the new Humble THQ Bundle.

OTHER BLOTS THIS MONTH: November 2012