Insomnia and the dentist

Summary: My day started with a dentist inflicting me pain for several hundred dollars, and has mostly involved keeping my mind off of it, since. How about yours?

Insomnia and the dentist

Got up early this morning, a day off for me, to go to the dentist, so that I could sit in a chair for three hours and let him pry my mouth open and grind off a millimeter from every side of one of my teeth. Just so I can go back in two weeks and get a crown put upon it. In the mean-time, I get to be really scared about doing something wrong (e.g., flossing too hard, eating the wrong food) and causing this temporary cap to fly right off. Which it already has, once, when the nurse was showing me what not to do and then, presumably, felt that experience was the best teacher by doing something on the naughty list and ejecting a fake tooth shell thing into the back of my throat.

I feel like I have a traitor in my mouth, one curious to see how much trust he can inspire, and then betray. For today, and tomorrow, I have put myself on a liquid- or really-soft-food diet. When I told my mother about this, she basically turned it into a "Good, you need to lose weight," moment, which is why my mother will never be a doctor...not with that bedside manner.

The day was not all bad. I got to relax, mostly, and it was pretty when the sun was up high. Unfortunately, I've had insomnia for several days, near on a week, and though I got good sleep last night with medical help (a couple of Tylenol PMs, which I will not be taking tonight), my body still seems to be getting really revved up about 10pm or so and then staying so through about 2am. My rhythms might have gotten swapped around the Christmas break, but usually they only take a day or two to recover. Which means it is probably some sort of deep-and-underlying variation of insomnia instead of a relatively easy fix one. I've learned the number one cure is to set a wake-up time every day and to stick to it, no matter what, and to cut out naps except the smallest sort. This is probably a bit like getting over a phobia of water by holding your head under it, and not exactly 100% safe, but I am at least getting 3-4 hours of sleep a night and, despite being a gray-headed old man, now, can probably survive long enough on that for my body to fix itself.

One possible culprit, and this feels slightly like a confession, has been the swapping out of one of my medicines. I was taking a mild blood-pressure medicine to keep my blood-pressure from spiking, as it would sometimes do when I get agitated, etc, and due to some negative side-effects had to switch to another mild medicine that is almost the same. But since about that time, my energy has been higher, and my heart has felt a bit more jittery, and it is probably working differently down inside me and that might be triggering the new cycle and leading to the issues with sleeping.

Enough about [the lack of] sleep, let's see what else I got in my bag of tricks. Not too much. Here is a photo I found trying to track down an old teacher's name (and getting only about as far as finding the school and school system websites): 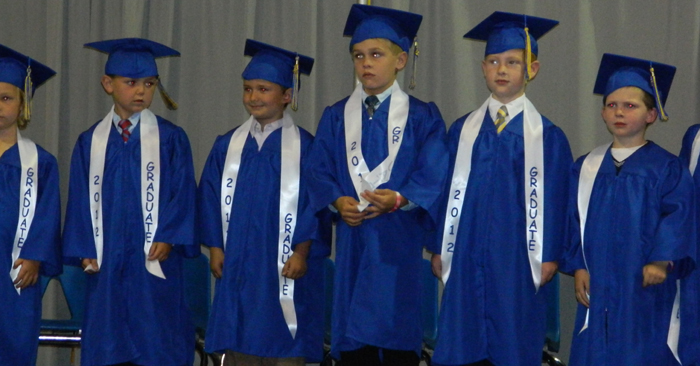 I don't even know which (exact) school they are graduating from, but I think it might just be my old elementary school. At any rate, I'm just sharing this for the kid in the middle, who is obviously the anti-Christ, gloating over his academic achievements and wondering when he gets to eat the souls of the other kids. Actually, on second glance, every kid on that stage except the one slightly to the right of Damion looks like an extra in a film, which means that Joe Normal there is screwed. And the 5:1 demon-possessed child ratio at my first alma mater might explain so many things. Like an incident with a Tonka truck, the old metal kind, being embedded into my forehead as a "schoolyard jest". Oh, how we laughed. And bled. Good times.

Hey, and I finally posted a video to YouTube, but rather than my well-procrastinated vlog—likely to be titled "Doug {alone | with friends}"—it was a video that I made with my wife involving the new Minecraft fireworks. It is not an astounding video, and there are handful of technical whoopsies, but I like it:

And, ok, I guess that's good. It's nearly 1am. I'm actually feeling pretty tired so I think I will take advantage of this fact, read for about half an hour, and pass out good. Take care, world, I'll see you soon.

OTHER BLOTS THIS MONTH: January 2013