Why make monsters in history when history made plenty of its own? The Monson Motor Lodge incident of June 1964.

Summary: Racism is a complicated thing, as is history, often beyond simple explanations unless we weed out all circumstances. One incident - the June 1964 pouring of acid into a swimming pool by James Brock - has recently been recast as particularly evil, an attack on children, and despite the visual evidence in front of them, many pass this along.

Note, if you were lead to this link because you were told this was somehow a defense of pouring acid on black protestors in the 1960s, you have been misinformed. The chief proof of that comes from actually reading the post itself [something some have failed to do], but I have written a follow-up: Someone was wrong on the internet.

Why make monsters in history when history made plenty of its own? The Monson Motor Lodge incident of June 1964.

I found myself on Tumblr yesterday afternoon, something I am wont to avoid, for it is an information nightmare. At best, it is the equivalent of printing up flyers, walking into a street, and slamming them—mixed with pornography and other people's content ripped out of context—into faces of passers-by. And then they slam their flyers, et al, into your face. And some other people come along and pick up your flyers and they scribble poorly written and unnecessarily argumentative notes on the back, and then fling them in everyone's face. And then everybody sits down and talks about how much better than Twitter this is. But, I digress.

On Tumblr, I found this: a photo (claimed to be) of a man pouring acid on children. The description more fully reads: "June, 1964. Black children integrate the swimming pool of the Monson Motel. To force them out, the owner pours acid into the water." It then goes on to have some WTF animated gifs and to talk about how 1964 is really not that far back in time and so forth, which is a good point to remember, generally. 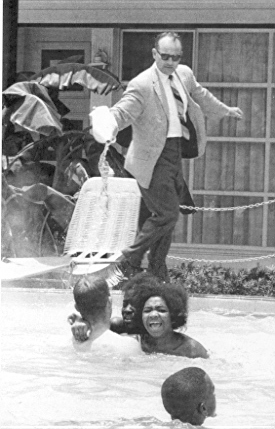 Images are funny things, especially relatively low quality ones taken out of context. If I say that is acid being poured unto children, it is horrifying, but if I were to tell you that was Bill Murray pouring cold water onto the back of some fans, you might even laugh. Until someone pointed out that wasn't Bill Murray. Just like the "pouring acid on black children" caption doesn't work when you realize that not everyone being "poured" upon is black, and they are not children. Despite these things, I initially believed the caption, and went out looking for some further proof about it, since you know, Tumblr, and found that the truth is a little harder to bottle with a eye-catching caption.

The photo was connected to the St. Augustine Movement, named for the town in Florida where it took place. Lots of peaceful protests and demonstrations were responded to with violence, which lead to more and more complicated protests. As an Alabamian, I often hear of Civil Rights solely in terms of Alabama. It's good to have a wide picture of things.

On June 11, 1964, Martin Luther King, Jr was arrested for trespassing at the Monson Motor Lodge after being asked to leave from its segregated restaurant. This (and other things) helped spurn on a group a group of protesters, black and white, to jump into the pool and Muriatic acid, used to clean the pool's tiles, was poured in by James Brock to scare them into getting out (and/or to actually hurt them, reports vary). It did not work, though it seems like it was effective in making the protesters at least nervous—the amount of acid to the amount of water being so small it was mostly safe—and so a cop jumped in to arrest people. Another photo, not included in that Tumblr post [I'll apply Hanlon's Razor, here], shows such, and shows the protesters more fully. Unfortunately, I have only found a tiny copy (from the first article linked, below):

Two recent articles from a local paper, to get a somewhat contrasting view (from each other):

Think about what would make someone see a photo of a man pouring acid into a pool full of people, an act designed to terrify and to attack, and then try to spruce it up by saying that it was children and kind of implying that these were kids just out for a swim. And think about people who respond to the caption rather than the evidence. Finally, think about all the other parts: the large crowd and the complex history and the fact that if you look at the second, where it is a very nice beach-side place, it doesn't look like a cheap motel pool turned into a tragedy, anymore. It loses its claustrophobia but gains a truth of what the protesters were really up against: institutionalized racism from the sort of people that were probably really nice to their pets and had loving parents and good, church-going children and, more importantly, thought of themselves as morally upright citizens doing the right thing for their society.

The initial Tumblr post has thousands of re-posts. With some of the reposts adding in things like "OMG, it's unbelievable that this actually happened. And yet, I sadly find truth in the picture", except, well, see this post for the irony of that.

When faced with a real life monstrous thing (the other beatings and miscarriages of justice going on around that time were arguably more monstrous), we create a fake monstrous thing that has more of a zing to it. Had the caption been, "James Brock pours acid near protesters to try and scare them out of his expensive pool while a group of people, white and black, look on and it ended up with people being arrested rather than burned," would it have gotten 15,000+ reblogs? Who knows? I doubt it. Just like when Brock retold the story over the next few days, I'm sure he tried to make it sound like an utter mob, a terrifying horde, overwhelming his establishment, rather than a clump of confused looking young people who were just trying to do what they thought was right.

History may be told by the victor, but it is sold to the uninterested.

Musings on Life, History, and Society

OTHER BLOTS THIS MONTH: February 2013