My homemade, practically free, standing desk and why I'm doing it

Thanks to some vagary of search engines, this page gets about 6 times the hits my later page, in which I talk about my more permanent, but still cheap, standing desk. I wanted to take a moment to point it out. I don't rehash the information here, and keep in mind that unlike the one pictured here where I just made use of available materials, but I kind of wanted to note that this was a saga with a later chapter. -- Doug

Summary: A week(ish) ago I worked out a simple, free [because it used things we already had] standing desk for my laptop to go into my study. The reason I did this? Well, I need to stand more. It's...ok. I'd recommend it to people, I think.

My homemade, practically free, standing desk and why I'm doing it

A number of people linked to this infographic, on the dangers of sitting, but I'll give a special shout-out to Emily Allee because her sharing of it in Google Reader was that "straw that broke the camel's back" moment of reading it that I actually paid attention to it. I'll share a bit of it at the end of this post. Some of the statements in it are problematic [for instance, by ignoring the calorie and food choice aspects, it attempts to correlate an 8% increase with sitting with a 200% increase in obesity] but it has a lot of interesting tidbits. Worth a gander, all that. 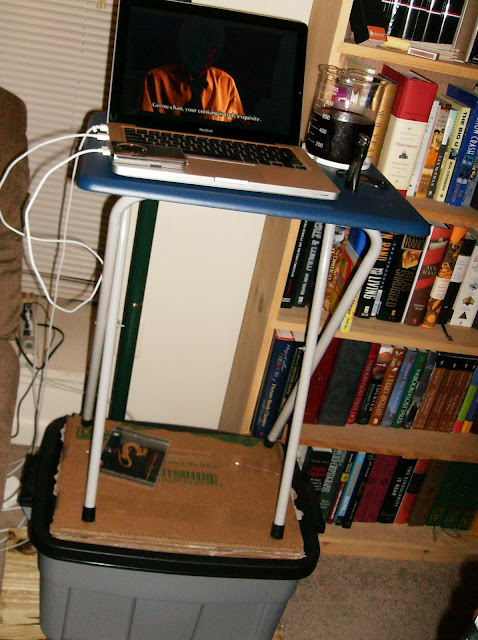 Except apparently half the "extending" desks (those in the proper price range) only come up to about 3.5', presumably to accommodate people in a variety of chairs, not so much while standing; and the more appropriately sized standing desks are expensive, partially because they tend to be motorized numbers who lift up and down. I couldn't use the former and had no real care to spend money on the latter, so I sought my own solution.

I took a rubber-crate we used to store away excess RPGs (good, heavy, and stable) and then I put my somewhat shoddy laptop stand on top. This first sucked a bit because the laptop legs bit into the rubbery lid. I took cardboard and cut out a few sheets, taped those together, which added not only a bit of lift but and stabilization but also helped to prevent the legs pushing into the lid. Now, the whole thing was working better but it needed a slightly more sturdy surface to sit upon AND it needed to be a little bit (about 4") taller. The one issue was fixed and the other slightly mediated by the inclusion of four two-by-fours added at the bottom. It still needs to be about 2"-4" taller, which I might be able to rig up by adding a second layer of short boards down, or through some other method, but for now it will do. I kind of plan on getting a thrift store podium and/or building one myself.

As for the experience. Well, the first day wasn't too bad. The thing wasn't perfect, but it was kind of fun. Second day sucked and by the third day I was starting to feel it. I mean feel it. Knees, back, and legs were all pretty stiff. Now that I have it adjusted in height, better, I'm starting to like it. Maybe even prefer it a little. It allows me to stretch and move around some. When something like the phone rings or someone knocks at the door, I am already up and in a position to respond. It makes it easier, when I'm thinking, to kind of step back and pace for a second, meaning I tend to spend downtime taking short walks rather than randomly surfing Google. It discourages eating and snacking at the desk, which is probably a good thing. Drinking tea and smoking a pipe works fine, which means I get to play Nineteenth Century British Clerk, which is a fun game.

I think I recommend it. Others might have a more elegant solution (some of you have tables or counter-tops that would work better). I know it won't be a total cure or anything. A person who sits for two hours and then jogs for two hours is probably a lot healthier than a person who stands for four, especially since no doubt our bad habits while sitting were first bad habits while standing. Slouched back, locking joints, that kind of thing. Oh, and you are possibly going to want a rubber mat and some good shoes. It can be a bit rough on the bare feet (though that's how I do it...collapsed arches, here I come!).

I think, ultimately, I want to set up a desktop (as opposed to laptop) model where the keyboard and mouse are about four and a half feet up, the monitor is about six feet up with speakers beside it, the tower is over on the left side in between and there are a series of shelves on the right for storing things. That way I would have the keyboard and mouse in the right place and I would be able to look/hear right even with the natural alignment of my head. That would be ideal.

Alright then, off to the graphic snippet and have a better one... 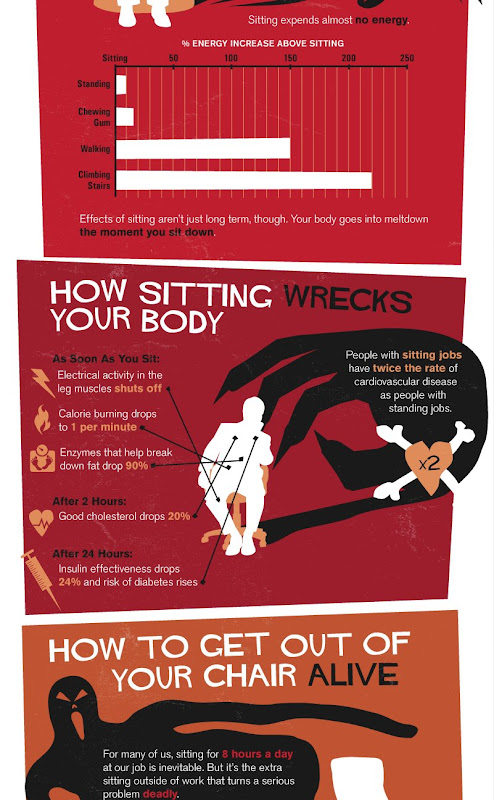