Summary: In 'The Box', the opening episode of Hammer/Bafflegab's horror collaboration, we come to the final test for maritime safety: a helicopter cabin submerged in dark water, that causes some to become paralyzed by things they do not wish to talk about.

Summary: When James Lavery refuses to come back to finish a safety course for off-shore rig workers, his instructor, Sean Dickens—voiced by Con O'Neill—investigates what lead to this change and what it has to do with "The Box", a stripped down helicopter cabin submerged in water to help test trainee's ability to swim to safety in a crash situation. When Lavery took part in the test, he sat down in the water in silence, still, until he was nearly rescued by a safety diver, and now shuts out his sister and others and can be heard talking to someone else, someone not in the room with him. After a second man has a similar experience, again refusing to talk about what he has seen despite obvious agitation and a near freak out; Dickens is forced to become more involved: going down into the pool himself, to find out what happened to those men, and faces the horrors that hides in the dark. 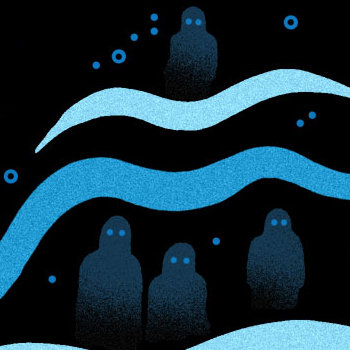 Review: Stephen Gallagher's "The Box", the first in the Hammer Chillers line of six half-hour collaborations between Hammer Films and Bafflegab Productions, is a fairly bare bones production, with a trimmed down cast (only four primary voices with some additionals) and a dialed down series of foley effects and little in the way of score. If it wasn't for a somewhat elaborate set-up around the eponymous Box itself, you could almost imagine this as a stage play with a minimalist set and rapid scene changes. The Box, though, is the kind of effect that makes audiowork fascinating, something that is no more than a few klaxons and sound effects becomes an instrument of terror as the listener taps into the feeling of being submerged in dark water, in a stripped out metal box, strapped in as the water rushes in. The listener has to wrap him- or herself into the audio, and it works well as a setting, imitating the cut-off feeling that, say, a pair of headphones in a darkened room might bring. As for the story, the plot is sufficient if sparse, with the highlight being the climactic moment where Dickens himself is down in the water. Brief but powerful. The rest of of the story could have been punched up a bit, perhaps, but it works as a chilling mood piece, spoiled slightly by certain obvious aspects to the goings on.

Score: 6/8. +1 if you have an particular fears of being submerged or being trapped in dark places. -1 if you like things to be particularly explained and/or not in obvious ways [there is an explanation, but an "obvious" explanation of symptoms, so to speak]. A bonus +1 for those that will enjoy taking advantage of the Bandcamp release system, giving you many formats to download in.

Commentary: [note, the commentary section will have SPOILERS and is meant more for those who have heard the piece or are able to enjoy horror with some of the twists probed, though I will avoid coming right out and spoiling it completely]. There is a point around half-way where the military service of Dickens and Lavergy is discussed, and from then on the question of whether or not Gallagher has seen or is referencing the episode "Thirty-Fathom Grave" was pretty obvious in my mind. Not that the presence of similarities between the two is limiting, for while the dark, watery, claustophrobia of The Box is a chief element of this episode's horror, Gallagher also taps into the "Thirty-Fathom" aesthetic of an actualized version of the survivor guilt many soldiers face.

There is enough meat strapped to these juxtaposed horrors that we could almost forgive it for not going deeper into the specific horror at hand: a trio of experiences coming out of the blue with the story even making sure to inform us that there is nothing special about The Box. It is simply a moment that developed rapidly, and we the listeners interacted with it and seemingly the whole of it (give or take some additional details with the aftermath). The only history to the piece is the history of the three men haunted by the box (and one of them is closed mouthed about it, so his history is left to the imagination). It gives the story a foreshortened immediacy, which works for it but also disrupts, with hindsight making the listener long a little for a Jamesian twist about a repurposed helicopter cabin being recovered from some wreckage or a statistical aberration at the safety school that was never accounted for. Half-hour stories are hard to make fuller, but story ends up being one additional scene (or a mild rewrite of a couple of existing scenes) from being an instant classic.